Well it didn't take long to find another piece of the puzzle regarding the bed warmer in my previous blog! 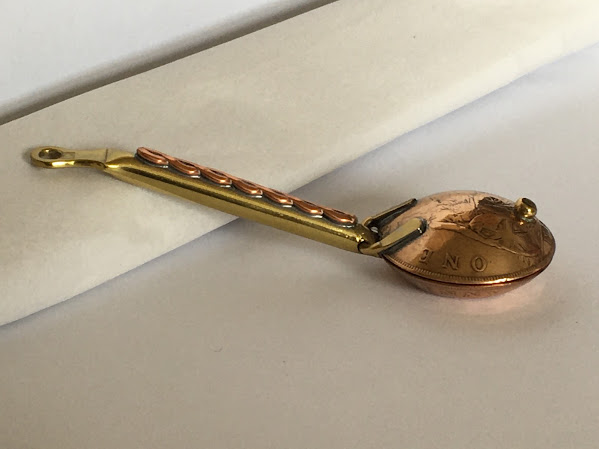 Bed Warmer - Coin Miniature by The Stubbington Workshop
My clever friend Claire has discovered that my lovely miniature bed warmer was made by Kevin J. Stubbington of The Stubbington Workshop in Portsmouth (UK).
There is a nice little YouTube video of Kevin being interviewed at the New Forest Show, posted in August in 2010. The caption by FRL Media reads: "Kevin Stubbington, founder of the famous Stubbington Workshop at Twickenham, has been a coppersmith for some twenty years. Apart from his practical skills, he is also gifted with artistic and creative flair. Underlying his work is a passion for the Victoria [sic] era." 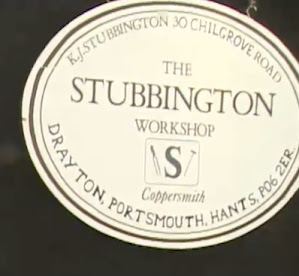 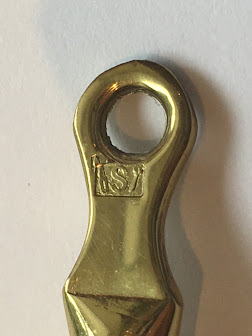 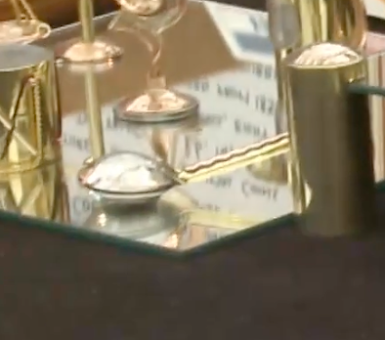 Screen Shot of a Bed Warming Pan Like Mine
in the YouTube Video
I was even able to spot a little bedwarmer just like mine in the opening shots of Kevin's stall. 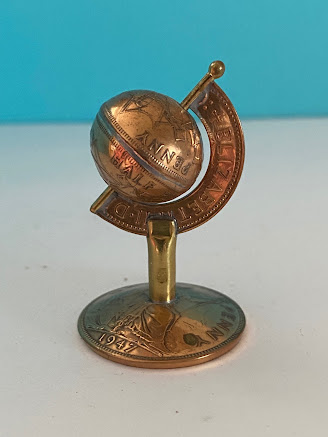 Miniature Globe made from Coins
Made by The Stubbington Workshop
©Claire Quick
And in fact, my friend Claire, having identified the maker of my bed warmer for me, then realised that she too had a piece by The Stubbington Workshop - one of the little globes discussed in the YouTube video. The little maker's mark on the upright part of the stand had previously gone unnoticed, so we're both pleased to know more about our items!
In the video, Kevin explains the he trained as a coppersmith, serving his apprenticeship in Portsmouth dockyard where he worked for about ten years before taking his work on the road and selling it to antique shops. He gradually developed an interest in antiques and then old coins, which then lead on to his business making coin miniatures like my little bed warmer.
You might have noticed that the video caption refers to "Twickenham" (London), whereas the sign on Kevin's stall indicates that the business was located at 30 Chilgrove Road, Drayton, Portsmouth, and it looks as if the the business relocated to Twickenham, perhaps soon after the interview was filmed.
As evidence of this relocation, at the time of writing, there is an example of a table and chair in its original box - sturdy plain white cardboard with an oval sticker on the lid. The sticker looks just like the oval sign displayed on Kevin's stall in the video (see photo above), however, the address given is "37 Hamilton Road, Twickenham, Middx., TW2 6SN, England". I can see too that the workshop is still listed at that address in various online telephone directories, which could mean that the business is still trading today.
Some of the other dolls' house-appropriate items which I spotted in the video were: a gramophone, a kettle, a jug, balance scales, candlesticks and holders, and a drum kit.
I will be keeping an eye out for them from now on!
Until next time,
Zoe
Posted by Zoe H at 06:20

Zoe H
I love to research and learn about the pieces in my collection and blog posts are a great way to keep a record of my findings. I also believe that sharing information and knowledge is the best way to increase knowledge and understanding in any field of study, so I hope that my ramblings will occasionally prove useful to other collectors.